Well, Jim, yesterday marked the end of the first Knitting Olympics. The competition was amazing.

You're right, Bob. And here to talk about her Olympic experience is Teri, from Leesburg, Virginia. As you may recall, her entry was a pair of Baltic mittens. Let's see how she did. So, Teri, it seemed that after a strong start, something happened and you lost that competitive fire.

Well, I wouldn't call the start especially strong, Jim. I didn't swatch and I didn't practice the plaiting technique before casting on. That slowed me down, especially when I read the instructions later and realized that I did it wrong. The other thing that slowed me down was my inability to count to five. It seems that I can only count to four.

But after those problems, it looks like you picked up steam and hit your stride. You were well on your way to completing the first mitten of the pair at the end of the first week of competition. What happened then?

You're right, Bob. I was so excited that I was on schedule, with very few tinking incidences. I just knew that success was within my reach. But after my Thursday knitting session, as I was assessing my work, I noticed a dropped stitch five rows earlier. This really threw me for a loop. I wasn't prepared for that level of problem solving and I didn't want to unknit five rows. So I took a rest day and pondered the problem.

What did you finally end up doing?

I tinked five rows early Saturday morning. I was able to pick up and keep knitting, but the fire just went out of me. As you know, half of the competition is psychological. I didn't have it in me to get up early to knit, work all day, then knit until midnight after I got home. I just sort of gave up.

But you completed one mitten, and it looks pretty good. The tension seems to be even, the pattern is pleasing, and the thumb pattern matches the mitten body pattern. 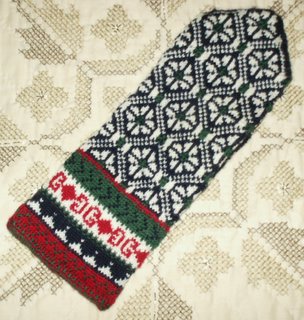 Yes, I completed the mitten on Saturday. But even that was dicey, Jim. After looking at Stephanie's color work and seeing how flat it was, I decided that the mitten was a failure. It was just too puckery. But I forgot about the magic of blocking. All the puckers just sort of steamed away and when all was said and done, I was quite pleased with my work. I'm disappointed, though, that I didn't have the fortitude and courage to push through my doubts and get to a point where I could complete the second mitten.

What are you taking away from your Olympic experience?

I've learned that I can knit things that I never thought I'd be knitting, Bob. When I saw Stephanie's MSF Latvian mittens last year, I was astounded at their beauty and just knew that I would never achieve that level of complexity, at least not any time soon. But after a brief flirtation with two-color knitting at Christmas, I was enchanted and decided to go for it. I've also learned that it is a mistake to listen to that little negative voice in my head.

And what's next for you?

I've got a lot of knitting that was put on hold, Jim. I plan to finish the second mitten. I'm in the process of knitting a baby blanket, which I need to finish. The baby came a little early and he had quite a rough start. He almost didn't make it. I'm happy to report that he's doing fine now and I'd like to finish the blanket by the time I visit them, which hopefully will be at the end of March.

Will you be competing in the next Knitting Olympics?

If they hold them again? Absolutely! It was a wonderful experience and it was very cool to be knitting, albeit virtually, with over 4000 others.

Well, Bob, that wraps it up for the 2006 Knitting Olympics. Many thanks to Stephanie and other members of the International Knitting Olympic Committee for sponsoring the competition. We look forward to the next competition, whenever that may be. Good night, and best wishes to all of the Knitting Olympics contenders.
Posted by Teri S. at 9:44 PM